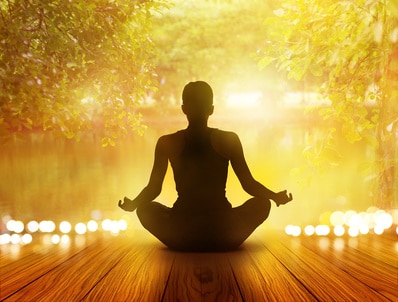 How Yoga Aids in Spiritual Development 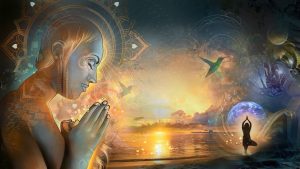 The 8 limbs of Yoga
Yoga is performed to increase health and fitness. However, ancient yogic tradition teaches that the spiritual and the physical are interconnected, and that one deeply affects the other. Therefore, the guide to physical health through yoga is inextricably linked to the guide to spiritual health. Reconciling the body with the spirit is a main objective of yoga. This is achieved by observing the eight limbs of yoga, which include:

Asanas or postures
Asana refers to yoga postures but in Patanjali’s initial practice, it referred to mastering the body to sit still for meditation. The practice of yoga asanas came about eight centuries later, which helped disciples ready their bodies for meditation. 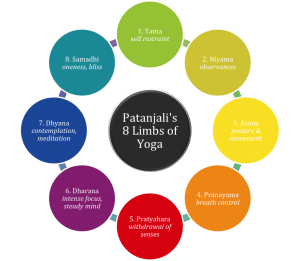 Pratyahara or sense withdrawal to prepare for Meditation

Samadhi, which spiritual enlightenment – merging with the Divine – bliss
Asanas, or postures, are but one limb of eight. Yoga also encourages its students to have high ethical standards, to know themselves inside and out through meditation and deep breathing exercises, and to train the mind to focus and concentrate on the moment at hand. The positive side effects of yoga demonstrate how the practice develops the spiritual body. The faithful yoga practitioner will eventually develop a sense of overall peace and contentment as they work toward achieving the highest state of consciousness. 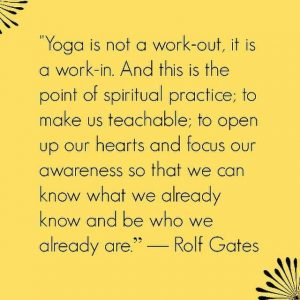 The yoga definition of spirituality is the process of coming to a state of full self-actualization, or awareness, by working toward higher levels of consciousness through self-discovery. Embarking on a spiritual journey is a unique experience to everyone, as it is a journey into oneself.   However, those who undertake the journey are the better for it. They are calmer, have a greater awareness of both themselves and the world around them, they exude positive energy and often appear younger than they really are. It takes years to achieve spiritual enlightenment and bliss through yoga, but mere days before you start noticing the spiritual development that comes with the study of yoga.